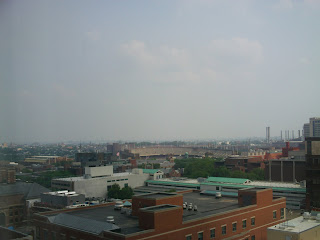 On 27 May, 2011, I was given a second treatment for the CCSVI in my MS. My son Edward flew up from Halifax Nova Scotia to Toronto Ontario. I picked him up at Pearson and he began the drive. He drove us home to Orillia from the airport, and everywhere we needed to go from that point on. We left Orillia on Wednesday 25 May and drove arrived in Wilkes-Barre PA that evening. The next day we arrived in Philadelphia where I was interviewed by Ali Gorman of ABC's affiliate station channel 6. We were at the Peripheral Vascular Treatment Center at 4220 Market St. at 7 am on the 27th.

The staff was great. Friendly people, and very efficient. I was asked for my name and birth date MANY times that day. I had filled out all but one of the forms ahead of time so admission was streamlined. One of the nurses told us that Dr. McGuckin had trained with Dr. Zamboni in Italy three months ago. That made me feel wonderful. Dr. McGuckin introduced himself to me when he came in that morning and we engaged in chit chat. Nice guy. I was prepped for surgery by being told to change into the gown and socks (not spiffy socks like the ones at Albany!). They asked if I'd shaved myself, but I hadn't been told to do that, so one of the nurses did it. That's something that didn't happen at Albany in 2010.
There's a great deal I don't remember. I do remember being wheeled down the hall to the operating room. I remember being swabbed and swabbed with iodine in preparation. Being draped with a disposable sheet, the groin area being about the only part of me that was exposed. My head was also exposed and I was given an oxygen tube at my nose. When I went to scratch that, I was told not to, that they would do it for me, and they did in a much gentler way than I would have. Fentanyl was administered through the IV and while I was awake, I wasn't really aware of a whole lot. I was told to hold my breath a couple of times, and could feel the balloons being expanded inside my veins. I only remember a sharp pain once, other pains as well, but nothing extraordinary.
I know Dr. McGuckin invited me to look at something he was doing on the fluoroscope, but since I wear bifocals, it wasn't easy to see it from where I was. I was happy that he wanted me to see it though. I guess I was in there for about 90 minutes, but it seemed like a lot less time - most likely because of the fentanyl. I was also given my first Plavix intravenously. Clean up was brief and I was wheeled back to where Edward was waiting for me. A short while later, Dr. McGuckin came out and told us what he'd done. He had inflated five balloons. He told me the sizes but I don't remember that part. One might have been in a renal vein but I'm not sure. I do know renal was mentioned. He also mentioned something about a vein that drains the spinal cord. Others were: one in each jugular - my left had become restenosed; two in the azygos which was not treated last year either. The right jugular has shown 'no significant stenosis' in Dr. Siskin's 2010 report, which I gather meant there was a bit of a stenosis, but he was being very cautious. Understandable, since it was very early in the learning curve of the CCSVI game and so much more has been learned in that year.
Things I've noticed
My sight is clearer, my hearing in my left ear is better. Some improved strength in my left leg, but at times it's still as bad as it was. My endurance is better in that I don't get as tired out by getting in and out of the car. My balance is still the pits. Perhaps it's still early. Perhaps I have an inner ear thing going on. My family doctor automatically thinks that if one has MS, that rules out all other things, it would seem, because I had to convince him to get me an appointment with an ear nose and throat specialist when last I saw him.
I'm happy that I saw Dr. McGuckin. I know I received the best treatment available in North America, and that he's at the top of his game. I'm happy to have such a wonderful and caring son who took the time away from his exceeding busy school schedule to drive me to and from Philadelphia. I'm also glad that I had that time to spend with him, and to experience new things with him. And we got to have an authentic Philly Cheese Steak that was SO GOOD! 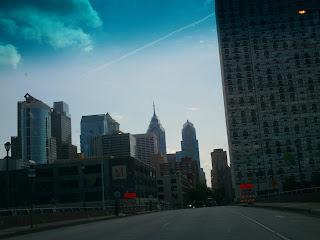 Leaving Philadelphia ---->
So now I wait for more improvements. I watch and hope they will come. I know that nothing will compare to the great strides I took when treated in Albany on 2 June 2010, but am sure that this time the improvements will last and I will have time to allow my body to heal. There is hope. Everyone with MS has hope now where there was none before.
We left Philly on the morning of 28 May and arrived near Genessee NY that evening. We finished our trip on 29 May, and Edward left for Halifax on 31 May, arriving at his home at about 6:45 pm
This note has only been proofread once, late in the day on 1 June.
NB: Tomorrow is the first anniversary of my first treatment for CCSVI. When I had that treatment, I had to hide the facts - where I was going and why, for fear of the clinic being shut down. Not a problem this year.
Acknowledgements: my dear son, my wonderful CCSVI brothers and sisters. Those who've been treated, retreated, and those who, in Canada, await treatment because of discrimination on the part of our government. And a big shout out to Tim Donovan and Angioplasty For ALL, and to Reba Scott for looking after dear Sadie in my absence.
Posted by curmudgeonine at 7:25 PM